Background
Back in 2000 I purchased my first DV camcorder. It was a Canon Elura that used MiniDV tapes. Every tape extracted about 13GB. Even today that's still a lot. You can easily fill hard drives with that much storage. At first I only edited the extracted clips then deleted them leaving the original footage on MiniDV tape. Tape was good for archival if you didn't mind waiting for the re-extraction.

Years have passed and I've switched to CF card which can't be used for archival. I have BD burners to make archival copies but I've found that old footage is still best kept close by. Initially I built a RAID desktop for keeping just photos. Then when .5 and 1TB drives became common I started keeping video on those drives.

It was initially going to be temporary but I've found that family events like birthdays and such required me to dig out years old footage so I never went back to delete them.   I got used to it. Fast forward to today and it's time for a major upgrade. My second generation self-built NAS is an Zotac IONITX-A-U running Ubuntu and SAMBA hooked up to USB drives via a hub. It's decent but not very fast. All those drives were formatted in NTFS and maxed out at 25MB/sec to read.    That's enough for viewing a few pictures here and there.  But I wanted something closer to what direct SATA gave me. 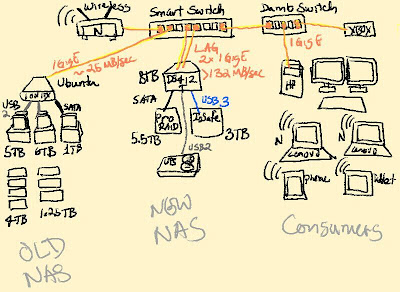 Picking the Synology DS412+
I originally considered the Drobo, Netgear and EMC/Iomega NAS.    I read the reviews and the Synology brand kept coming up.   Two things sold me on the thing: (1) Simplicity of DSM (2) Raw performance.  It was the fastest of the more reasonably priced NAS on the market.

Here's a sample of it's performance in my current configuration.

Not bad is it? That's over half the bandwidth of a directly hooked up SATA drive. Given that a single gigabit ethernet port has a theoretical cap of 125MB/sec its looking pretty good.   What this allows me to do is pick out some footage, pictures and music from the NAS and output to local USB and SATA drives.   It's the not the fastest configuration but while I'm doing quick edits in Sony Vegas on my laptop, the desktop could be rendering a composition in Adobe After Effects.


Hold your horses! What's that switch and UPS for you ask? The UPS gives the NAS a chance to do a proper shutdown should there be a power failure. The Smart Switch allows you to bond two ethernet ports together on the DS412+ but keep one IP address. A plain dumb switch would allow you to use the second port as a backup. But a Smart/Managed switch allows both to be used actively with a feature called Link Aggregation (LAG). A 1GigE port has a theoretical max of 125MB/sec but there is some waste in there that brings the real throughput much less. Those individual SATA devices in our previous tests could achieve 175MB/sec. Not to mention I have the ProRaid shared simultaneously as the DS412+'s internal volumes. I can't exceed the throughput of a single port for one transfer but I can have multiple devices and transfers at once each using either available port.  Effectively you can have a ceiling of 250MB/sec on all combined transfers.

Modest Simultaneous Device Test
Can we prove that LAG is useful?


Yes! 132MB/sec with three devices.   This is a write test which is a slower operation.  If I started multiple copies plus video playback I could probably use up more bandwidth.  Keep in mind that 125MB is a theoretical maximum for a single port.  The extra port allows other devices to access the NAS if one is fully saturated.


A Hint on Adding a Share to your Libraries
You might be wondering how I was able to mount My Documents from the NAS.   It's a trick using symbolic links.