Good news everyone! The Lenovo W520 has an e-SATA port that didn't support port multiplier (tested with JBOD enclosures) but there are options for external RAID. I have on my desk a Mediasonic ProRaid+ HFR2-SU3S2FW enclosure. Unlike plain JBOD enclosures like the Thermaltake BlacX Duet or the Mediasonic ProBox series, this unit presents the drives as a single disk via built in hardware RAID.  Only if you run it on JBOD/Spanning mode do you need a port multiplier. 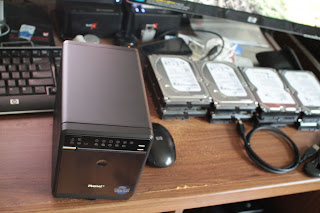 I have to confess, I didn't buy the ProRaid for the W520. It was meant to become an expansion unit to my NAS which didn't support port multiplier either. I'm thinking I should get another of these units or something from its family. Startech sell similar units though a bit more expensive.

I went with the Mediasonic 4-bay because it was cheaper and the good feedback from Amazon, Newegg and Synology forums.   The unit I purchased came with e-SATA, USB, FW400 and FW800 ports.   Another model skips the FW400 and FW800.

Attached to the W520's e-SATA port it is presented as "H/W RAID 5" device.   I didn't try changing the RAID type but I guess its name may vary according to the RAID selected. 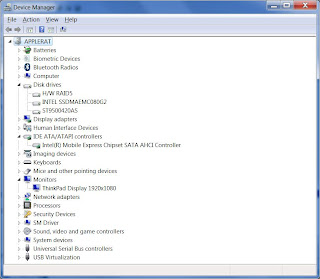 Once connected it functions like any other disk which can be initialized then formatted.  Windows doesn't know or care that it is a RAID with four 3TB disks.   All it sees is an 8.353TB device. 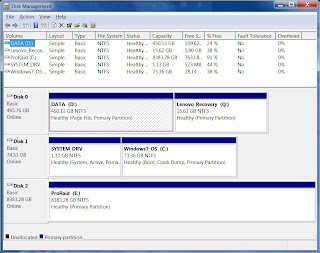 Here is the same device attached to my SMB server.   It's hooked up to a non-port multiplier e-SATA port on a Zotac IONITX-A-U motherboard.   The operating system is Ubuntu 10.04 with support for NTFS volumes.  Disk Analyzer must be using base-10 math as the space reported is 9TB (3x3TB + 3TB parity). 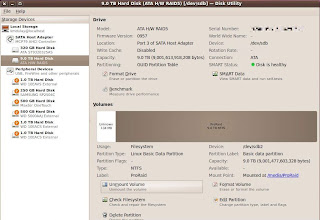 Gotcha for First Initialization
Even after reading the manual it caught me unawares at first.  The unit will immediately flash the red H icon after spinup if a RAID setting has not yet been selected.   The instructions are explicit, hold down the mode button for 3 seconds until the RAID mode flashes.  Press mode several times to select the RAID type.  I chose RAID-5 in my case.  Then go to the back of the unit.  Remove the tab covering the RAID confirmation button next to the power plug.  Hold it down until it powers down.   Next time you power up the RAID mode is set.   The device will be uninitialized if the drives have never been used in that RAID mode before.  And any content will be lost once it has started up.


If the drives need to be migrated to another ProRaid unit, you're supposed to be able to use them in the same RAID mode.  The trick is to setup the RAID mode with the ProRaid empty.  As in, no drives should be inserted until it is RAID confirmed and powered down.

Performance Baseline
The ProRaid shows up as a SATA II (3.0Gbps / 384MB/sec) device.  Which is fine since the enclosure is meant for 3.5" mechanical hard drives.   Spindles will barely reach the limit of even SATA 1.0 (1.5 Gbps / 192MB/sec) bandwidth. 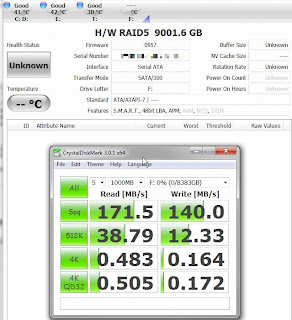 The above readings are with four ST3000DM001 SATA III (6.0Gbps) drives hooked up to my HPE-380T desktop.   The physical drives are hidden by the hardware RAID so S.M.A.R.T. info is rather limited.   Health status is readable for the array despite the screenshot.   What surprised me was how the RAID 5 peaked higher for sequential operation that Software RAID 0.   For all other operations types, RAID 0 still won as expected.

A Robocopy write test was much slower at 28.11 MB/sec. It seems a far cry from the Software RAID 0 setup previously tested.   But that's an apples to oranges comparison.   The CrystalMark test is still at odds at the above results.  I guess I'll take it as a low end baseline for ProRAID.  I'm not too disappointed since that's still faster than my Samba server which I use presently.   The source disk for the test contained thousands of photos, videos and sound files which were stock material for video editing.


Power Consumption
The ProRaid is supposed to power itself down when the host computer shuts down.   I tested it with my Lenovo W520, HP Elite 380T and Zotac IONITX-A-U but the unit did not power down while hooked up to either eSATA, USB 3.0 or USB 2.0.    Later I would discover that it would shutdown correctly on eSATA for a Synology DS412+.   I could have sworn the laptop and desktop were setup for AHCI mode on the BIOS of at least the HP.   This is something to research on the Mediasonic forum.


I got those readings with a Kill-A-Watt EZ

(paid link). My interest was in the peak reading so I could figure out which of my UPS would be able to take it. Happily my old Cyberpower 485VA (300 watt) unit had plenty of headroom for this.