This technique is a workaround for programs launched directly from Windows. Programs launched from within Oculus Home switch audio automatically. Unfortunately I do not have a solution for SteamVR games. If you find a way I'd be interested to know.

Steps
1. Download and install AudioSwitch
2. Run AudioSwitch from the commandline to display audio devices
3. Take note of your device numbers
In my case the Rift is device 0 while my speakers are device 3.

Update: If you want to launch programs like VoiceAttack, Captail's Log and such before the ED Launcher use following syntax:
My current launcher looks like this

So we have a short term problem. The CV1 has a curved face while the Leap Motion is flat. Also the new VR Mount, as of this writing, is still some weeks away. Turns out you don't need a special mount or even a 3d printed one if you have a supply store nearby.

Most of the above you can find in Home Depot if you're in the States. The painter's tape is to mark where the leap motion should go. It has to be painter's tape because I want this to be cleanly removable. The same reason for using mounting putty/tack instead of Sugru. The Velcro ties is for fastening the Leap Motion's cable together with the CV1's. The USB 3.0 extension cable is optional though recommended to reach the nearest spare USB 3.0 port on the PC.

It's best to use a cheaper webcam that leaks some IR lights. I tried to use my phone's camera but its IR filter was so good I couldn't see the Rift's lights.

Finding the lights
Open the Windows Camera App (Windows 10, 8) or any equivalent application that will let you live view your camera. Start up Oculus Home then point your Rift so the camera can see it. You should see the lights on the front of the Rift. We want to mount the Leap Motion in a way that covers the fewest lights. 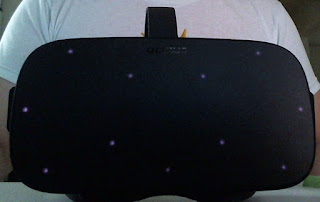 Cut a piece of painters tape in the size of the Leap Motion. 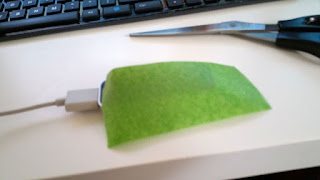 Using the webcam as a guide, mount the painter's tape on the Rift avoiding the lights. Give the lights as much room as you can. 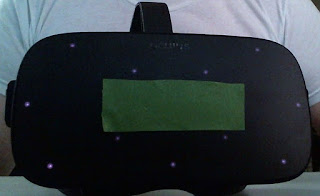 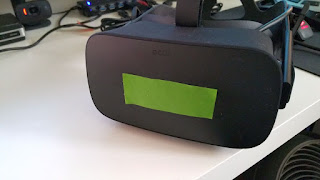 Some Cameras may have stronger IR filtering. 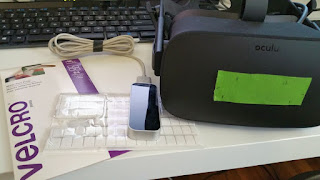 Roll a piece of tack and mount to the back of the Leap Motion toward one end. Repeat for the other end. Leave the center unoccupied. The two ends will accomodate the curve of the Rift. 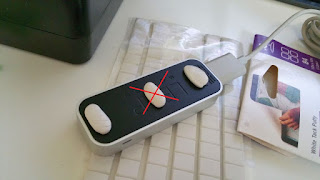 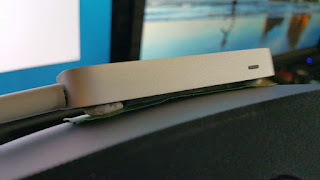 Reinforce the mount by adding additional tack to the top and bottom of the Leap Motion. 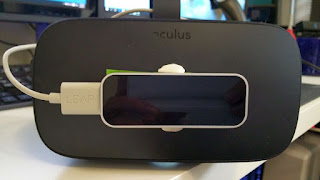 Route the Leap's main cable to the opposite side of the Rift. 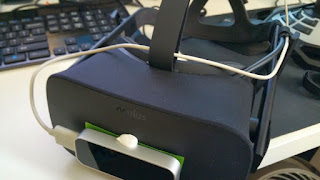 Use Velcro ties to fasten the Leap USB cable to the Rift cable. Make it as tight as possible so the Leap doesn't get yanked from the face. 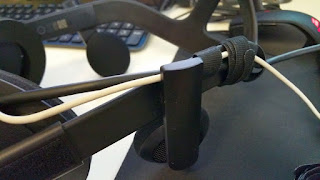 Extend the Leap USB cable as necessary. I used a 6 foot cable. 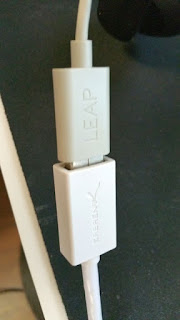 Depending on the angle to the camera some lights may be obscured but it doesn't appear to affect tracking.

Use the HORI Ace-Edge controller with Elite Dangerous

I usually fly with a Saitek X55 and I had a backup Thrustmaster T-Flight but neither was available. There were Xbox 360 controllers lying around but I remembered having an Ace Combat 6 HORI Ace-Edge stick from the Xbox 360 Game. So why not try to make it work with Elite Dangerous?

Test the ACE Edge
Run joy.cpl -> Properties -> Test. Move the stick and press all the buttons to test that you are getting inputs. The Throttle two knobs on the throttle are dummies. The button above LB is also false. M1/M2/M3 mode switches are not recognized by joy.cpl. Same with the Xbox button on the Stick body.

It should return the above if you only have the Ace-Edge hooked up as a gamepad.

Find your existing Custom*.binds and make backups in C:\Users\your user id\AppData\Local\Frontier Developments\Elite Dangerous\Options\Bindings. ED currently comes in 32-bit (1.5), 64-bit (1.5) and 64-bit-only Horizons (2.02). There appears to be multiple directories where DeviceMappings.xml can be modified. But you only need to change the one you intend to play.