Install mSATA and SODIMM RAM; Uninstall HDD
All I needed was a set of small Philips screwdrivers. I bought a set from Walmart years ago when I had to take out my T40's hard drive. Lenovo has some excellent documentation on how to take apart each model of Thinkpad. 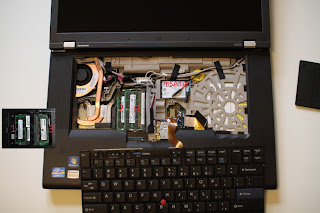 The mSATA and two RAM slots are underneath the keyboard. Before that you have to get to the panel under the laptop containing the two other RAM slots and the screws holding the keyboard. This W520 is a quad-core model so four slots were available. The dual core version apparently only has two. The slot meant for WWAN doubles as an mSATA slot, which explains the wires. I think the mSATA is more useful than built-in wireless broadband. 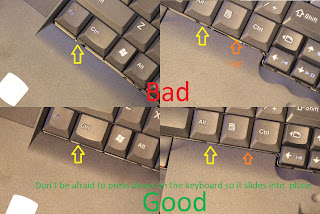 Make sure your keyboard has seated properly or it will flex as you type.


Re-run Lenovo PC Doctor on Aftermarket Configuration
Pop-in the CD, make sure your CPU and RAM are good. This part takes about 20 minutes.


Re-run Memtest86+ on Stock Configuration
Give it a more thorough RAM check. This check takes a little over an hour.


Factory Restore onto mSATA
At this point the hard drive has been removed so the factory install will target the mSATA. It's also best to have tested this new configuration with PC Doctor and memtest86+. I wasted an entire day trying to diagnose what was wrong with Factory Recovery and USB Boot. If these variables are eliminated the restore process goes much smoother.

It's quite easy. Just load the Boot Media CD/DVD to start the process. Accept the prompts then pick where your Data Media will be coming from. Most likely it will be more DVDs. Over the course of an hour you'll be popping DVDs into the machine. Before I finished diagnosing the RAM problem I did try the DVD boot + USB Data Media process and it was much faster. I got stuck after a signature problem so when my root problem was resolved I went the DVD route. It was the safest for me because I created that set when the machine was still in stock configuration. All the other copies since were during the bad configuration. The HDD boot manager got corrupted, I wouldn't trust the USB/DVDs it wrote since.

Once the factory restore is done you can eject the last DVD. The W520 should boot from the mSATA. Go through the Windows 7 first time boot process. When it asks to define a user specify a temporary administrator name. You'll be discarding it later. I named mine "pro" like this guide I was following. You can follow all the prompts until it either asks for a reboot or gives you the Desktop.

Before you shutdown you should do a quick SSD alignment check.

The factory disks were pretty good about handling the SSD.


Re-install HDD
Put the Hard Drive back in its bay and close everything up. Boot up again, it should have defaulted to the mSATA. Login then find your way into Disk Management.


My HDD was Disk 0 while the SSD was Disk 1. It's easy to tell despite both having the same partition names because one is smaller than the other. I deleted the SYSTEM_DRV and Windows7_OS from the HDD by right-click Delete Volume. Then I reallocated the space as DATA. This is where I will be moving my users and some programs. The Q: and F: drives should both be good copies. In my case I had some doubts because the HDD was 15.63GB while the SDD was 15.62GB. This is probably due to SSD alignment optimization. But just to be sure I downloaded Clonezilla to copy the SSD partition over to the HDD partition.

If you decide to do the same make certain to download the testing release. Don't ask me why, but the stable release would just hang at reading the Bitmap. That step shouldn't take more than a few seconds. Go figure! 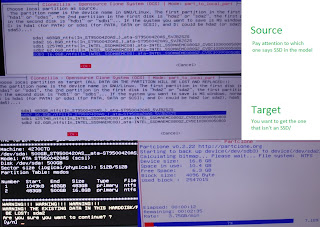 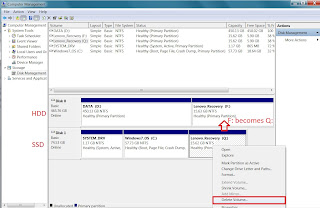 After the clone, or not if you're adventurous, you can delete the Q: partition from the SSD. Then change F: drive letter to Q: by right-click "Change Drive Letter and Paths...". The blue ThinkVantage button should work right away. 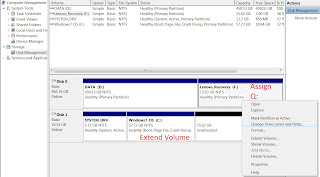 Extend the Windows7_OS partition into the unallocated space by right-click Extend Volume. Follow the defaults to allocate all the space previously occupied by the recovery volume. 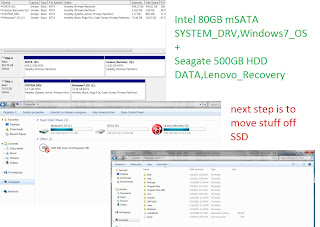 With all the partition work done, the next step is to optimize for SSD operation.

Thanks for this wonderful resource. I followed your directions pretty much for the letter for my Thinkpad T520 and a new mSATA, except for creating the temporary administrator and changing the user folder. Everything appears to work fine except for one thing -- System Restore functionality is broken. It listed two entries for Windows7_OS, and any attempt to create a restore point, or to manage the properties in any way, leads to an indecipherable error. I think this might have something to do with the repartitioning as at some point during the process there are actually two drives with Windows7_OS, the SSD and the old HDD.

Does your system restore functionality work?

If you're talking about Control Panel\System and Security\System -> System Protection -> Create Restore Point, I have that turned off on my C: drive. It's generally recommended to turn that off for SSD because it eats up space. The counter to this risk is to take regular backups of your C: drive which should be all system. If you used the Factory Restore it should have defaulted to Off on C:. The presence of another drive called Windows7_OS shouldn't have confused it if you created the restore on C: as an SSD.

Turns out that after I removed the HDD from the system, System Restore magically started working again. Then when I put it back in, it stayed working. So I do think it had something to do with duplicate disk names, but who knows.

Incidently, I used the hard junction trick from Lifehacker to move the Users folder from the SSD to the HDD. I think it's a little less intimidating to do than the registry editing stuff.

I agree, I tried to do it that way at first but my bad luck wouldn't let me boot and restore correctly.

Are you using an SSD on the ultrabay/primary bay or is this a Renice/mydigitalSSD you're using?

Thanks so much for the step by step guide. It was really helpful in convincing me that I should try installing the msata SDD + HDD combo myself.

One question though: If I'm doing a fresh install of w7 on the SDD, is it still necessary to do the clonezilla and partitioning stuff in Step 10? After the new w7 install, and after putting in the HDD, can I just reformat the HDD and use the whole thing as a data drive?

You can reformat it if you've already burned the factory DVDs. Also don't forget to make a copy of the drivers directory (has the base drivers for all the lenovo devices not included in standard windows).

Actually you don't even have to completely reformat it since the original HDD only has three partitions. You can reformat and rename the Windows7_OS to a data drive. The advantage of keeping a recovery partition is the Thinkvantage button will work in case you need to do a factory install.

Great content, But I think you should provide its product keys too. Anyway If someone like me don't have, Windows or office product key can be bought from MS site or its official store but I searched and just bought