I have, or rather had, a CMR Blackbird. No, I didn't sell it. It's on the other side of the planet with the 2nd Unit. I had the complete kit with bag, extra weights and stand. The problem was carrying it on international flights took half my luggage space. Since it had more use where I had taken it, the Blackbird stayed. In the meantime I've been using a Gorillapod SLR as a sort of compact shoulder rig. It's been all over the country as far as Hawaii. But nothing beats a handheld stabilizer for dynamic shots. The Steadicam Merlin 2 was recently announced and I was interested. Only it was quite expensive at $800. Then while browsing through Amazon I happened upon the Opteka SteadyVid Pro. Hey! $179.95. Quite tempting.

There are more cons than pros. Did I mention it was cheap? I wouldn't trade my Blackbird in for the Steadyvid Pro. The Blackbird had documentation (manual, video and email support!), graduated markers and 8 lbs of capacity. It was worth the $670 for the complete kit ($470 for just the stabilizer). But what if you can't afford to spend that much for a stabilizer? You could go DIY. That's if you have the tools, skills and patience. Okay, I digress. Who would want a Steadyvid Pro anyway? If you want to dabble, the Steadyvid Pro might be a good introduction. If you want a 2nd stabilizer for infrequent use this might be for you. If you have no patience, you might want to stay away. You need to expend money, time and effort whichever stabilizer you choose. The expensive ones come with support. With the Opteka you get what you paid for. Which is probably why you're reading this. At this price point, you'll be dependent on other users to help you out. Hurray, user community!

Batteries not included, some assembly required, your mileage may vary!
Quick Control Guide and Concepts
Before going into detail on how to balance, here is a quick guide to the controls and a hint on the concepts. 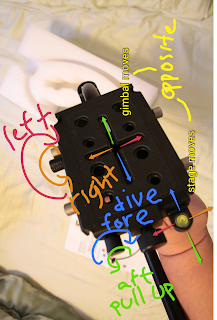 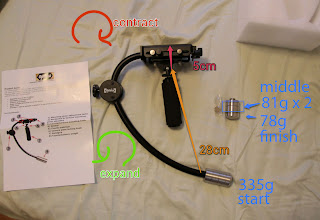 One double-sided sheet is all the instructions that come with the kit. Help!


The stabilizer is a really complicated looking version of a see-saw. If you remember your playground days, a heavy kid near the fulcrum of a see-saw can be lifted by a lighter child sitting further from the fulcrum. If they can find the sweet spot, both children can hang suspended off the ground. That's the state of equilibrium. With a stabilizer, the gimbal is the fulcrum. One short end of the see-saw is from the gimbal to the camera plate. The other longer end is from the gimbal to the weights on the arched shaft.