After an NVidia update Photoshop CS5 kept complaining "Photoshop has discovered a problem with the display driver and has disabled GPU enhancement." A thread I found suggested to rollback the driver but that was not the correct solution. This other site gave me a clue. Optimus was assigned Intel HD graphics rather than the NVIDIA Quadro 2000M (or 1000M if that's what you have) to Photoshop. Auto is not a bad Global setting but not good for your CUDA enabled Adobe applications. You can customize the settings per program to the NVIDIA Control Panel either via Windows Control Panel or the taskbar applet for Optimus. 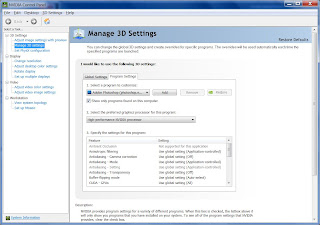 
Stop and Restart Photoshop. The error should have gone away. You can confirm you are using the NVIDIA graphics card by going to System Info. 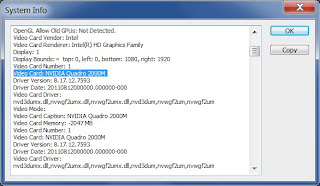 Help -> System Info -> Scroll down until you find Video Card: NVIDIA Quadro 2000M (or Intel HD Graphics ... which is the cause of your problem)


Update: The above appeared to be a symptom of something wrong with the NVIDIA driver update as well. After fixing Photoshop I discovered that After Effects and Premier would fail to start with Sniffer_GPU.exe running a long time before Windows complains. I went through cycles of rollback and patch uninstall of Windows patches. And then putting them back when it didn't work. The final fix was to uninstall the NVIDIA Graphics Driver and rebooting. The reboot automatically reinstalled the graphics software. Another reboot later and the my favorite Adobe apps were all working again.
Posted by Mike at Wednesday, April 04, 2012

Hi! Thanks for the great information you havr provided! You have touched on crucuial points! Clipping Path Thanks for sharing nice information with us. i like your post and all you share with us is uptodate and quite informative, i would like to bookmark the page so i can come here again to read you, as you have done a wonderful job.

I wish more authors of this type of content would take the time you did to research and write so well. I am very impressed with your vision and insight. Clipping Path Company

good information.Gorgeous this web page will be famous amid all blogging users, due to it’s fastidious content and article.

It is a very nice post. thanks for sharing!

It's time to work with new project and make more clients. Make photography business more effective by taking our editing service. In fact, if you are really serious about your financial success, you can deal with Clipping Path Unit. We will give you the best editing service within your budget and it's on time.

Excellent .. Amazing .. I’ll bookmark your blog and take the feeds also…I’m happy to find so many useful info here in the post, we need work out more techniques in this regard, thanks for sharing. cost effective marketing

I have recently started a blog, the info you provide on this site has helped me greatly. Thanks for all of your time & work. Hostgator 80 off

Thanks for sharing this useful info..clipping path service

[...]just beneath, are numerous totally not related sites to ours, however, they are surely worth going over[...]… Google SEO Service

I am happy to find this post very useful for me, as it contains lot of information. I always prefer to read the quality content and this thing I found in you post. Thanks for sharing. Webmetrix Group Search Engine Optimization

I have recently started a blog, the info you provide on this site has helped me greatly. Thanks for all of your time & work. China SEO Company

I would like to say that this blog really convinced me to do it! Thanks, very good post. Web Design

Great post. I am looking for this kind of post for a long time. Thanks.
clipping Path Service

Personally I think overjoyed I discovered the blogs.

This is a very good article. This is my first visit to this site. I found a lot of useful information in your blog, particularly in the conversation section. It's a fantastic article.
clipping path Service

Thankyou For Sharing Such An Excellent Post Enjoyed Reading it.


Great Post Enjoyed Reading it will come to explore more..